“They think it’s all over…it is now!”

Think back over your favorite moments in sports history. There’s a reason they’ve stuck with you.

Chances are you were young, wide-eyed, and full of vim and vigor when you watched them. Like a great album that came out when you were 16, these moments linger with us and can often be recalled with pulsating precision.

But it’s not just the physical action of the moment that we remember. It’s the commentary that went with it.

This tweet from esteemed poker media professional Lance Bradley got us thinking:

“Do you believe in miracles? Yes!”

“The band is out on the field!”

What are the greatest poker commentator moments in history?

Here, your humble writer has compiled a list of the most memorable poker commentary moments (in other words, quotes that stuck with him).

Read through the list and think about your favorite poker hands from TV. What great commentary have we missed off our list?

Naturally, we’ve got to kick things off with the quote that got this crazy ball rolling. It’s the most recent quote by far (in fact, it’s just a few days old at the time of writing) but we think it’s one that’s going to be around for a while.

Here’s the scene. It’s a WSOP 2022 final table. PokerGo’s Remko Rinkema and Donnie Peters are in the commentary booth. Sixteen-time bracelet winner Phil Hellmuth returns to the table with a roast beef sandwich.

Then he takes a bite. And nothing will ever be the same.

WHAT IN THE WORLD!

It’s Day 1B of the Main Event.

What are you having for breakfast today? pic.twitter.com/XGFIAhlC1c 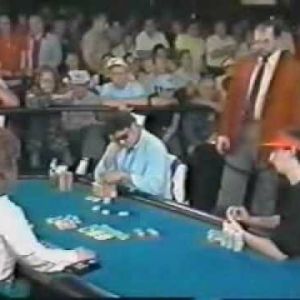 While Johnny Chan winning his second consecutive WSOP Main Event in 1988 is legendary enough, the commentary that went with it was superb and sticks in the mind of every poker fan, for one very cool and important reason: Rounders.

This scene was immortalized in the greatest poker film of all time, as Matt Damon’s Mike McDermott watches an old VHS tape of Chan trapping Erik Seidel to take down the big one.

Unfortunately, we can’t confirm the name of the commentator, nor could we find a clip of it online. But hey, it’s just another excuse to go watch Rounders for the gazillionth time.

You didn’t think Phil Hellmuth would only make one appearance on this list, did you?

High Stakes Poker is arguably the best poker TV show of all time and its commentators, Gabe Kablan and AJ Benza are two of the best to ever do it.

We could spend hours watching back through the eight seasons that Kaplan has commented on pulling out zinger after zinger, but for now, we’ll just leave you with this one:

The late, great Mike Sexton is undoubtedly one of the greatest poker commentators of all time.

“He is probably the most colorful non-color guy to ever call the game,” poker commentator Joe Stapleton said. “He makes it seem like you were hanging out with a real gambler, and is one of the few pros who took to broadcasting immediately.”

And in this clip, he’s commentating alongside another poker commentary legend: Jesse May.

We could happily spend endless hours watching through the countless WPT final tables and PartyPoker events that Sexton commentated on, but instead, we thought we’d go with this simple line Sexton uttered in what he described as “the most weirdly played hand in poker history”.

Kaplan: “What is it that Francis Scott Key said when he was in the Baltimore Harbor?”

Tom Dwan has top pair and a flush draw, Barry’s got aces.

Kaplan: “And when the hand is over, let’s see who remains at the dawn’s early light.”

The unmitigated passion. The pitch-perfect harmony. The sheer flabbergastedness of it all.

You love to hear it.

When David Tuchman and Robert Williamson III got in the booth for this cash game featuring Phil Ivey and Tom Dwan, they knew they’d see some incredible action.

As it turned out, they’d see the first ever televised million-dollar pot.

And when that turn card hit, they delivered one of the most memorable bits of commentary in all of poker.

1. “This is beyond fairy tale… It’s inconceivable.”

When an accountant and amateur poker player named Chris Moneymaker took down the 2003 WSOP Main Event, he provided the spark that led to a poker boom.

But when Norman Chad said this now legendary line alongside the great Lon McEachern in a clip seen by millions around the world, he showed us all just how special this victory was.

And he made every amateur poker player around the world believe that maybe, just maybe, they could have their very own fairy tale ending.

We’d also like to give a huge shout-out to poker’s other fantastic commentators who could no doubt fill a list all of their own, including Jesse May, Joe Stapleton, James Hartigan, Vince Van Patten, Ali Nejad, Nick Schulman, Tony Dunst, Sam Grafton et al.