This is the second time in five months that Aleksis–known as ‘Dr.Durrrq’ on PokerStars, ‘SimplySensational’ on ACR, and ‘WhereIsMyBeer’ on GGPoker–has picked up this award. In fact, he was named our first-ever Constant Crusher back in January.

Aleksis had another fantastic month throughout May. Here’s a look at the results:

You’ll notice the most significant score on that list came from a massive run in the SCOOP $530 Sunday Million on PokerStars. This time Aleksis couldn’t land a podium finish, but still picked up a healthy $19,784 for an eighth-place finish.

We’ve got to hand it to this BBZ community member, who made two massive SCOOP final tables within just a few days of each other. 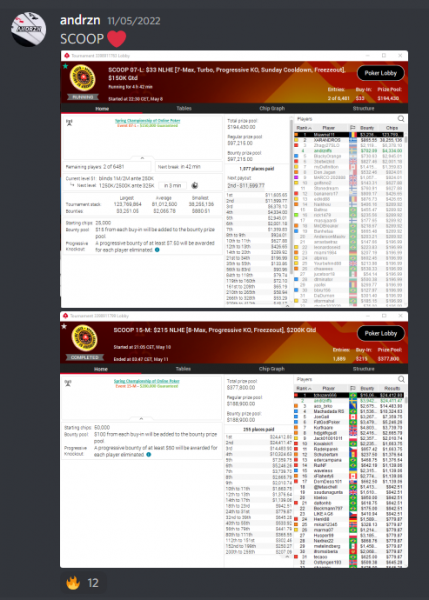 andrzn finished fourth in a $33 7-Max Turbo PKO edition of the Sunday Cooldown for $5,036.

Then a couple of days later, finished second in a $215 PKO Freezeout, narrowingly missing out on a SCOOP title but banking $28,353 for their efforts.

There’s nothing like popping into the Discord and just dropping the fact that you’ve won a SCOOP.

That’s exactly what eike_akio, known as Mr. Havener on PokerStars, did.

He took down the $55 SCOOP Kickoff–the second even of the series–for a massive $39,036 score and a trophy. 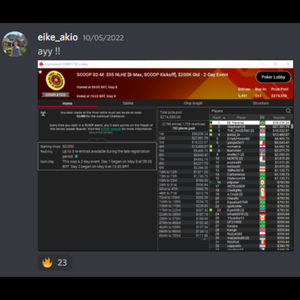