Posted in Uncategorized
Author: info  Published Date: March 17, 2022  Leave a Comment on Lessons from Bungakat: When to overbet the turn 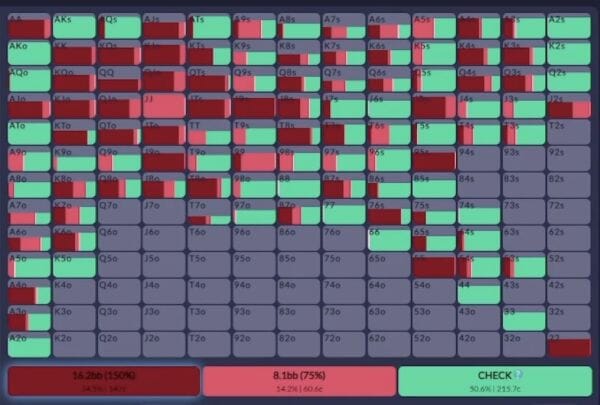 These days, it’s anything but easy. The overbet has become one of the most sophisticated plays in any poker player’s arsenal, particularly when you’re in-position on the turn.

The reasons why we should overbet the turn are:

Seems reasonable, right? Yet many players fail to recognize good spots to overbet in-game, despite understanding the benefits.

So, when should you overbet the turn?

In the new Apestyles Bootcamp bundle on BBZ, our coach Jargo “bungakat” Alaväli hosts a seminar on overbetting in which he presents the audience with a number of different hand examples (a couple of which we’re going to look at in this article).

When the villain’s range is capped

Bungakat opens with J♥5♥ on the button and the big blind defends, taking them to a J♠2♠5♦ flop.

He’s flopped top two pair on a board with flush and straight draws available. Bungakat c-bets for a third of the pot when checked to and the villain defends.

It’s safe to assume that when the villain holds sets or two pairs on draw-heavy boards, they’re going to check-raise them. As they opted just to call the c-bet, their range is capped.

“Did the board change?” asks bungakat. “We’re super deep so we really need to drag in some money with good hands. It would be different if we were only 30 big blinds deep as I could get it all-in by betting pot on the turn.”

Aside from some jack-nine combos, the board didn’t really change on the turn, making this an undeniable spot for bungakat to overbet. He opts for a 1.5x pot size and the big blind calls.

“Whenever the flush comes in, you can pretty much never go for the overbet,” explains bungakat. “But out-of-position is supposed to be defending most jack-x and most nine-x here, as well as some gutshots.”

When you look at his entire range, it turns out there’s a 35% frequency overbet here. 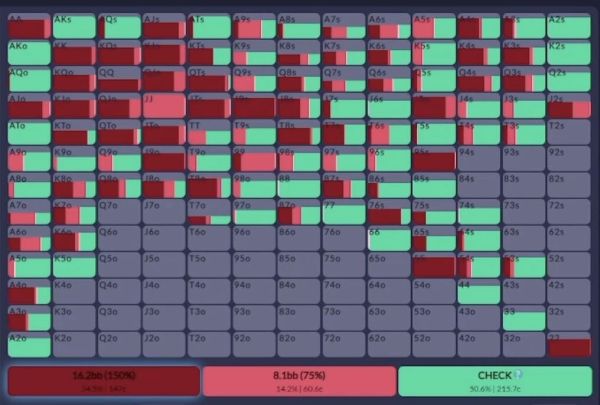 Perhaps surprisingly, one of the hands which is full-weighted towards calling here is king-queen offsuit. “I wouldn’t have thought that would be true here,” says bungakat. “I thought it would be a mix. But it makes sense. You have two overs and a heavy part of the in-position value range is going to be jack-x, and you block king-jack and queen-jack, plus you have a gutshot and overcards to the jack.”

Well, did the river change the board? “Sure, he can have straights, but it’s not going to be a big part of his range here,” says Bungakat. “I don’t think the 10♥ changed that much.

“I think his calling range is going to be really heavy on jack-x, so I’m happier to jam pocket queens than this hand.”

Instead, bungakat goes for a two-thirds pot size. “If you have king-jack, ace-jack or queen jack, you’d probably want to use this size as well. This size also protects us if he three-bet jams, which almost never happens unless he hit the nuts.”

Now that we know that king-queen should still be in the villain’s range, it makes bungakat like his two-thirds bet even more. “There could still be some jamming, so because the other guy now has some nuts on this board, it feels like a smaller size is preferred here.”

When the turn/river is a brick

In this next example, bungakat opens A♦K♥ under the gun and the small blind is the only caller. The flop comes J♥2♣K♦.

Bungakat has top pair top kicker and c-bets for a third-pot when checked to. Call.

Then the turn is the 4♠. It’s checked to bungakat and again, he asks whether the board has changed.

“This is the one question you need to ask yourself when playing deeper-stacked,” he says. “Did the board change? Whenever you say no, you can overbet being the aggressor in position. If you’re not sure, bet two-thirds instead.”

When we have a nut-advantage

In this same example, bungakat also has a big nut advantage against the small blind’s range. He can almost never have the best possible hands–pocket kings, pocket jacks, ace-king etc.–whereas we can.

So when we have a strong hand, the nut advantage, and the turn is a brick, it’s time to overbet.

Bungakat makes it 1.5x the pot and the villain makes the call.

The 8♣ completes the board. It’s another brick, as the board hasn’t changed once again.

“We can use a larger overbet size because he just can’t have anything that beats our hand,” says bungakat. “OK, maybe he has king-eight, and maybe he floated pocket fours, sure. But other than that, he shouldn’t really have anything. This is now a mandatory jam, I don’t think it’s even close.”

Bungakat’s overbetting video is just one of many from the Apestyles Bootcamp, which offers more than 35 hours of elite training material for just $199.99. You can get hold of all of this content today.